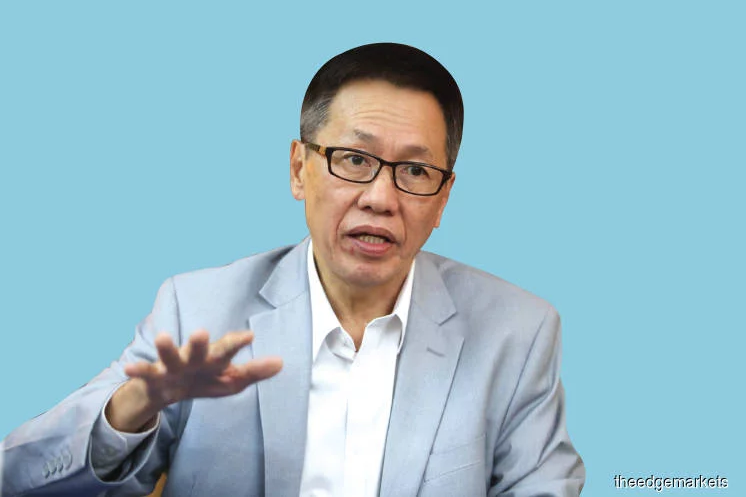 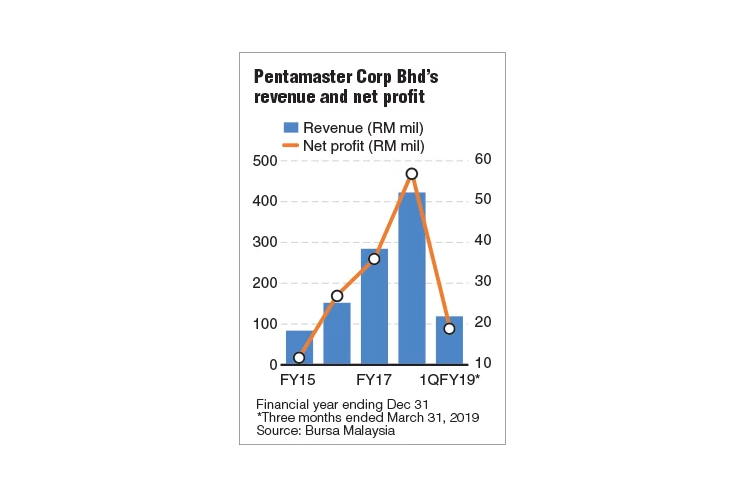 KUALA LUMPUR: According to the Semiconductor Industry Association (SIA), worldwide sales of semiconductors declined some 15% during the first quarter of 2019, but Penang-based Pentamaster Corp Bhd, which manufactures automated tester equipment or chip testers, is not worried.

For the first quarter of FY19, the company’s net profit already more than doubled to RM19.56 million from RM7.23 million last year due to greater operating efficiency that led to higher profit margins and net interest income. Its quarterly revenue increased 19.5% to RM118.76 million versus RM99.38 million last year.

Pentamaster is keeping to its projections despite the potential dampener it sees on sales from the ban on Huawei Technologies Co Ltd in the US, according to its co-founder and chairman Chuah Choon Bin. This is because the group’s other business segments are also growing, thanks to the anticipated increase in adoption of fifth-generation (5G) technology in the telecommunications and automotive industries.

“We will generally be doing well this year. But for next year, prospects will be even much better-looking with the upcoming 5G,” Chuah told The Edge Financial Daily in a recent interview.

He said there are still a lot of opportunities in the industry and that any slowdown is just a temporary setback. This is why Pentamaster is taking the opportunity to do more research and development (R&D), said Chuah, adding that even its customers are looking into new technologies which will result in them looking to test the new solutions. This means more opportunities for Pentamaster to work with them.

“They can’t be waiting till the industry is back up and then only start looking for new innovations. Come 2020, when 5G is launched in the market, the semiconductor business will see another boom. By then, there will be no time to do R&D. They will be busy delivering project after project.

“We are in a very niche market. Our customers continue to innovate, and for every new technology, they engage with us a year ahead [to work] on their solutions,” Chuah added.

Apart from its flagship chip testers, Chuah said the company is also broadening the group’s exposure and development of 3D sensing technology for VCSEL (vertical-cavity surface emitting laser) — which is used in smartphones and is in high demand — as well as the automotive segment.

“Our growth potential does not depend on how big the market size is as there is always [a] market [for our solutions]. The limitation we face is the number of engineers we have, as they are the ones working on the solutions,” said Chuah.

With over 380 engineers, Chuah said Pentamaster is still in hiring mode and is looking to have 450 engineers this year. “Generally, one engineer can contribute about RM1.2 million or RM1.3 million of sales per year,” said Chuah.

Meanwhile, Chuah said Pentamaster has been benefitting from the trade diversion as a result of the Sino-US trade tension, as US companies have moved out of China to relocate elsewhere.

“When they move out of China and relocate to Malaysia, they will look for local suppliers for their automation or equipment,” said Chuah. The situation has helped Pentamaster gain more customers.

Even some who have relocated to India and Vietnam are now Pentamaster’s customers, Chuah said.

Chuah said the group is working on maintaining its gross profit margin at about 30% to 35%. As at March 31, 2019, Pentamaster’s order book stood at RM250 million, which will keep the group busy for the next six to nine months.

The telecommunications business makes up the bulk of its sales so far, at 60%, followed by 20% from factory automation, 15% from automotive, and 5% from its general consumer electronics business.

Geographically, Chuah said Pentamaster’s single largest customer is based in Singapore, and its orders this year will make up less than half its total sales — versus more than 60% in FY18 — while the remainder will be contributed from US, China and European customers.

In line with its earnings growth, Pentamaster shares have been climbing in the past 12 months. Though it dived on Tuesday following news of Huawei’s ban in the US, Pentamaster’s closing share price of RM4.10 on Tuesday is still up some 77.5% from a year ago.

Having raised RM192 million by floating the shares of its 63%-owned automated solution arm Pentamaster International Ltd in Hong Kong in January last year, investors may have wondered what Pentamaster plans to do with the RM100 million that has been earmarked for Pentamaster’s own expansion.

A JV and an acquisition on the cards

According to Chuah, a potential joint venture (JV) and a potential acquisition by the end of this year are two things on the table.

The JV will likely be with a company involved in the business of test solutions for smart sensors, while the acquisition will possibly be a single-use medical device automation company. But Chuah declined to reveal more as talks are still ongoing.

For 2019, Pentamaster plans to spend RM30 million of its internal funds to expand its existing plant in Penang, with the upgrade works involving a warehouse, a multilayer car park and an R&D centre.

The company has not paid any dividends since 2008. When asked about this, Chuah said a payout should not be ruled out. “We will first have to look at how we perform, how the acquisition and JV will go … how much money will be spent. If there is extra, we will return it to shareholders,” he said.

If the extra is not returned, he said, it will be carefully spent or reinvested in the group to expand its business or improve operational activities.

Sourced from : The Edge Markets